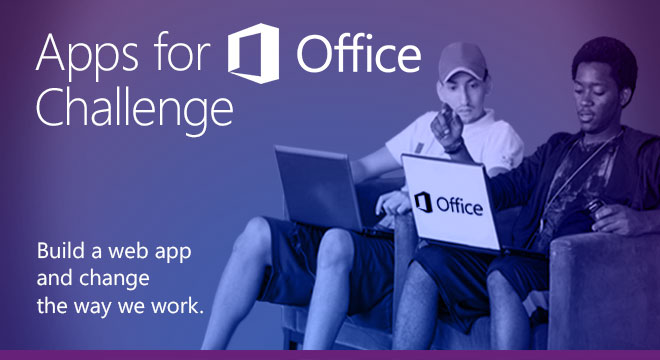 Build a web app and change the way we work.

Ever wished email could do more for you or a calendar appointment could be more dynamic? When you’re writing documents or building spreadsheets, is there something that could help you to present data in a different way or check your document for correct references ? If you create a presentation for a class, was there something missing that would have really made it shine?

You have the power to make that all come true. Build a web app in common languages such as HTML, JavaScript, PHP, or .NET and you can publish it to the Apps for Office Store where it can be purchased by hundreds of millions of users.

Apps for Office is a platform for developers to create cloud-hosted web apps that work inside Microsoft Word, Outlook, Excel, PowerPoint, Project, and SharePoint. These apps work seamlessly within the installed, desktop versions of Office 2013 and in the Office 365 cloud apps, adding new features, tools, and content to the software used by millions worldwide.

The Apps for Office Challenge is how you get started. Teams of up to four students worldwide are invited to submit short written proposals for their idea by January 23. The Microsoft Office team will pick the best proposals and then work directly with those teams as they develop their web apps. You’ll have access to specialists right in the heart of Microsoft who will review your work and point you in the right direction. Imagine your next job interview when you tell them how you partnered with Microsoft!

From those shortlisted teams, two World Finalist teams will win a trip to Seattle in July, 2014, to compete in the Imagine Cup World Finals. These teams will meet the Microsoft Office experts they’ve been working with and compete on stage for first and second-place prizes of $5,000 and $3,000 – and of course, you’ll get your app published in the Apps for Office Store.

How to Get Started

Ready to change your life? Ready to take a shot at teaming up with Microsoft Office to build amazing web apps? Then it’s time to get started:

Thank you for your feedback.